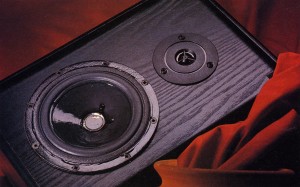 Royd’s Topaz is one of the models in the company’s well-established seven-litre range. Although small, the Royd’s are spunky performers with a commendably sturdy bass register. They can be used as bookshelf but Royd recommends using them on stands with the back of the cabinet one-and-three-quarter inches from the rear wall.
Experimentation shows that you needn’t be quite that precise about placing them but it’s worth paying attention to it; they aren’t bright but they are on the lively side of neutral. It’s also worthwhile being choosy about partnering equipment; they’re not a tough speaker to drive but they respond enthusiastically to high quality amplifiers.
In a sympathetic system these speakers deliver an exciting view of rock or jazz music. They’re rhythmically responsive and delight in funky bass lines or the cross rhythms of modern jazz. Their tight bass and clean treble do real justice to rhythm sections of this kind of music. Tracks with a groove, such as US 3’s Cantaloop Fantasia or Gabrielle’s Dreams, sound tremendously lively and compel you to respond physically to the beat.
Vocalists, too, tough the parts that some speakers don’t allow them to reach. The Royd’s aren’t free from coloration but they’re articulate and expressive and that counts for more than absolute tonal purity. They’re also pleasingly consistent and don’t change the character of difficult voices, such as Natalie Merchant’s.
Despite their vivacity, these speakers handle frenetic indie rock as securely they do mainstream music. you might expect listening to Carter USM tracks on a lively speaker to be akin to dancing barefoot on razor blades but that’s not so with these orderly, detailed baby Royds.
They give a candit view of classical music that’s more likely to satisfy listeners who are interested in the music itself rather than the cosmetics of its presentation. The speakers don’t for instance, sweeten abrasive-sounding string sections or smooth out strident horns.
Being wall-mounted also restricts the Royd’s imagery to just one plane. However, we still appreciated their wart ‘n’ all portrayal.