There were two variations of the Squire that were released during its lifetime. The earlier models had a bass driver very similar to the Minstrel and Doublets, with a centre phase plug. The later models had a different model with a flat centre. I’m not 100% of the origin of this later bass driver (maybe Dynaudio?) or whether Joe Akroyd customised it from stock at all.

The general consensus is the early models sound better, the later ones have a more ‘shut in’ sound.

The Squire will surround you with a sophisticated sound. This high definition loudspeaker delivers lifesize dynamic sound and reveals all the detail and scale inherent in music. A new and radical bass unit has been specially developed to match the cabinet which is of a unique laminated construction. This lamination provides magnetic shielding, allowing The Squire to be positioned very close to a T.V., while also improving the sound quality.

The stylish upright cabinet has a lower compartment which can be filled with sand or other granular heavy damping material. When scaled and with the wooden base screwed in to place, the increased sensitivity and powerful bass offers a quality of sound which has to he heard to be believed. Mirrored side ports are incorporated to allow for easy siting and individual listening satisfaction.

The Squire can be bi-wired and comes in three finishes, with complimentary black wood bases which have three spikes for easy adjustment.

The Squire is magnetically shielded for use in A/V systems and could be sand filled.
Price guide: Retailed for £349 in 1995. These don’t come up for sale often, however one immaculate pair went for £103 on ebay in July ’09 and another for £165 in April 2013. 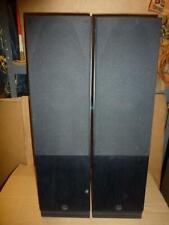 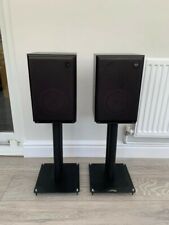