Reproduced from a review in “What Hi-Fi?”, published in August 1995. 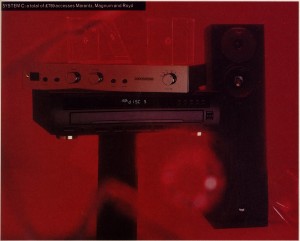 You might not expect a multiplayer from Marantz, that purveyor of single-CD players of renown, but the company has applied its expertise to the arena of multiplay, resulting in this CC-45. Although it was designed primarily for commercial use — shops, bars and the like — the Marantz name suggests it might be no domestic disaster either.

So does this five-disc £250 carousel machine share the sonic pedigree of its established stogie disc stablemates? Yes, but only to an extent. When we first tested it last month, we found it to be smooth and cultured but with a slightly unhealthy tendency to play it safe. In the right system, though, this criticism could become something of an asset, and it was with this in mind that we hand-picked its partners for this system test.

We settled on Magnum’s IA.170 (£270), a chrome goddess of an amp that’ll satisfy anyone with a fetish for shiny polished frontages. Its performance reflects just as brightly, with crisp musicality that positively pulses with crackling energy.

Then there are the speakers — Royd’s The Minstrel compact floorstanders (£239-£298 depending on finish). Visually they’re something of an acquired taste, with slim, sharp-edged cabinets that look a tad rough and ready, especially in standard black vinyl form as used here. Since they stand only 62.5cm high you might think they’re too short for proper stereo imaging, but aided by screw-on bases that slant the speakers upwards, it’s really not a problem. When you actually get to hear them, The Minstrels’ performance is a lot easier to get used to than their appearance. The song they sing brims with open clarity and strength of purpose, with a bass that shakes and a treble that stings.

The combined effect of these three very different components is impressive to say the least Pitch the Marantz multiplayer’s under-stated poise in with the more punchy, engaging sound sup-plied by the Magnum/Royd combination and the result is attention-grabbing yet eminently listenable. The stripped down acoustic intensity of Kristin Hersh ‘s Your Ghost from her Hips and Makers album is a splendid test of any system’s musical communication skills, and this set-up passes without a stutter. Her voice twines and writhes in tandem with guest vocalist Michael Stipe to mesmerizing effect, backed by bittersweet guitar and cello and just the occasional ultra-deep single beat of a drum.

But the system is a little more revealing of its shortcomings with material of a more aggressive and complex nature. The Verve’s immense single This is Music is a sprawling mass of guitars that very few set-ups can truly get to grips with Our combination tries valiantly but ends up a bit harsh and disjointed, without the driving soundstage the track needs.