Reproduced from a Hi-Fi Choice published in September 1991 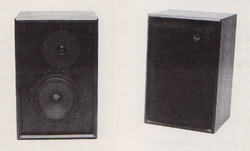 In many respects it’s a cost-pared version of the estimable Sintra, a personal favourite of this reviewer that was covered in issue 90. Both share the same rather special little main driver, the Sapphire economies being found in the omission of mass damping on the enclosure panels, and the substitution of a less costly tweeter.

One thing that hasn’t changed is the good quality real wood veneer wrap, which is still quite unmatched by even the best vinyl prints, both in appearance and to the touch. But then you expect to find a few luxury touches if you’re paying £200 for something this small.

To one already conditioned to lifting the little 7.5kg Sintras, the Sapphire seems distinctly less solid, but in fact 5kg is itself pretty substantial for a box this side. The main driver has no dust cap to protect the magnetic gap from possible pollution, so the fitted foam grille is a permanent fixture. Its appearance is perhaps a matter of taste, though the acoustic transparency of the foam is invariably excellent.

The unusual Royd main driver has a tiny 90mm paper cone driven from a 19mm voice coil and a generous magnet. The rigid cast frame is nicely open at the back, and has no fewer than eight fixing holes. All eight rather diddy woodscrew were pretty well tightened into the MDF baffle, this tough composite, some 13mm thick, making the whole box very rigid.

The inside is lined with light wadding, and the heavy rubberised ventilated port acts as a brace/damper by being tensioned against the magnet. The tweeter is a Vifa-sourced 19mm soft dome, and the drivers are fed through a simple hardwired crossover behind the 4mm input terminal pair. The matching open frame stand looks good value at £79.

Test report
Sensitivity is a generous 88dB, aided and abetted by a nice easy load for the partnering amplifier, but compromised by some pretty obvious limitations towards the bass end of the spectrum, due to the limited size of both enclosure and driver.

Accepting that there’s nothing of consequence below 50Hz, the overall response trends aren’t at all bad, but are certainly far from perfect, and also differ markedly from the norm. Optimum bass balance should be achieved, as the manufacturer suggests, abut 15-30cm from the wall.

This brings the midbass level, aided and abetted by the port resonance, up to match the midrange. But there’s no avoiding the broad loss of energy through the two octaves comprising the upper bass and lower midrange, and that in turn leaves the next octave and a half somewhat exposed. There’s a slight discontinuity at the crossover point itself, but no suckout, and treble output thereafter is unusually flat and extended.

Sound quality
The Sapphire received a very uneven reaction from the listening panel, the lack of body and bass weight receiving due criticism from all while several panellists also found the mid and treble altogether too forward and aggressive.

However, despite these obvious cosmetic deficiencies, extended hand-on listening revealed significant positive qualities besides. The midrange and treble is exceptionally fast and coherent, with excellent timing, and this in turn helps break down the barrier between illusion and reality to a quite remarkable degree, given a good enough source. The Sapphire is musically very informative – but also brought astonishing realism to a Nicam Test Match live broadcast.

Going over to the Royd from a more average loudspeaker can be a bit of a shock. The upfront presentation is initially discomforting, but given a few minutes of acclimatisation and the return to the previous speaker brings a real sense loss, as the glimpses of reality give way to an altogether more prosaic – if more tonally accurate – presentation.

Conclusion
Like others from the Royd stable, the £200 Sapphire has a somewhat controversial performance. Lack of genuine weight and power beneath a rather projected midrange can make for an edgy and uncomfortable experience. But the sheer speed and coherence can also be captivating. On the end of a good quality, carefully chosen system, there’s no speaker at the pride known to the author that can create such a convincing illusion of reality. Recommended then, but not for the faint hearted.