Reproduced from What Hi-Fi? August 1993. 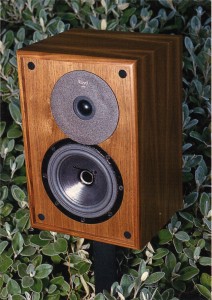 Royd Sapphire II
Loudspeakers: £245
Type bookshelf/stands
Position close to a rear mat
Sensitivity 89dB/VV/m
Impedance 8ohms
Max power 60 Watts
Biwirable yes
For Highly involving; acute timing; good bass from a small cabinet
Against Need a very high quality amp to give their best
Verdict *****
The Royds might not satisfy all listeners’ demands, but they’ll appeal strongly to those who are sensitive to music’s timing and dynamics
Royd 0952 290700

The Sapphire IIs are part of Royd’s Seven Litre range — the figure refers to the internal volume of the cabinet — and they’re the most compact design here. They’re reflex ported loudspeakers and need to be used close to a rear wall to give their lowest frequencies some support.
The mark II version of the small but sophisticated Sapphires use Royd’s newly developed tweeter— the company wasn’t satisfied with commercially available options and so designed its own, which it claims produces a sweet-er sound than that of the original model. This sweetness, Royd says, is achieved without any loss of the speed or attack that characterised the original design.
The company suggests that you take care choosing an amplifier to drive the speakers and our tests reinforce that advice: their speed and attack can tum into harshness with an unsuitable amplifier. Start your search with models from the Naim, Heybrook and Exposure ranges, whose tight, grippy sound seems to suit the Royds.
So partnered, the Sapphires deliver a sound that’s indeed fast and attacking. Transient information, such as drum strikes and guitar leading edges, is smartly conveyed, lending a pleasing urgency and precision to timing and rhythms. The speakers don’t just play in time, they groove and catch the mood of rock tracks that are all the better for this.
In presentational terms they’re not as polished-sounding or accommodating as, say, the Rogers LS4A/ 2s, but they certainly bring music to life far more vividly. Placed and partnered properly they present acoustic instruments in a very credible fashion, and give a sensitive, refined account of female vocals — an acid test for any speaker.