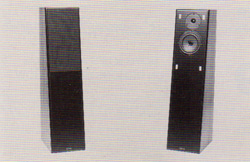 Royd is a classic example of the small British loudspeaker company whose products reflect the personal vision of one engineer. For many years Joe Akroyd’s company concentrated on fairly conventional, good value two-way boxes selling at around £100 or so. Then came the anything-but-conventional Eden (Choice June ’89) a £240 miniature that is threatening to become a cult amongst cognoscenti who welcome (or tolerate) its idiosyncrasies for some very real strengths. The heart of the Eden is a rather unusual bass/mid driver based on a very strong cast basket, a very light small paper cone, and a tiny 1.5cm voice coil. This same driver (albeit a significantly different version thereof) forms the basis of the much larger £485 Apex which is the subject of this review. However, in place of the small reflex box with mass damped panels, Apex uses a so called ‘transmission line’ form of bass loading.
Students of hi-fi will note the close similarity between the Apex and a new loud speaker from turntable specialist Rega (Choice Personal Messages October ’89). This is no accident. Rega has worked with transmission lines for many years, and was much impressed by the Eden driver, so in a sense one company contributed the driver, the other the enclosure. However the two models are by no means identical, subsequent development and production engineering introduced considerable detail variation.
A transmission line operates something like a cross between a reflex and a tuned column. Behind the drivers a vertical partition divides the enclosure into a ‘line’ twice the length of the enclosure height, the object being to damp the fundamental resonance of the main driver and augment the bass output at low frequencies. The small bass/mid used here means Apex can get away with a shorter line of smaller cross sectional area than the behemoths models of old (IMF et a1). One wouldn’t call it a small speaker, but it’s attractively slim, tapers backwards towards the top, and takes up little more room space than a bookshelf model sitting on a stand.
The wrap is real wood, the front and back smartly finished in black, and the little grille is fixed (I prised one off an Eden once, and still haven’t managed to get it to stay back in place). The cabinet is fixed to a spiked frame ‘stand’ which increases the footprint but also somehow makes the whole thing look a little ungainly. A generously specified and quite complex crossover is fitted within the stand with flying leads to the cabinet proper – visually clumsy, it permits ultimate four way drive mode flexibility: passive, bi-wire, bi-amp or active.

TEST REPORT
Considering its main driver is so small, the Apex does well to manage an average sensitivity without having to make life difficult for the amplifier with a low impedance. The transmission line us making a healthy contribution too, as comparison of Apex and Eden shows: specifically, it adds at least 5 and as much as 10dB to the output at all frequencies below 160Hz, though it also introduces some phase difficulties which makes siting quite critical.
The responses show a fair amount of unevenness and an overall mid bias. Against the wall, the mid becomes less lumpy and the range 40-200Hz is filled in to a useful extent, though the ‘forwardness’ around 1-1.5kHz remains a barrier to genuine neutrality. The new tweeter also provides a better balanced treble than the Eden.

SOUND QUALITY
Where the Eden’s lack of bass and forward mid had unsettled and worried members of the listening panel, the Apex’s much better balance immediately won them over enabling its other virtues of fine midband dynamics, speed and clarity to be appreciated properly. Not generous, power handling is nevertheless adequate for respectable loudness to be achieved.
It’s not a tidy sounding loudspeaker, and wall mount LF re-enforcement with its attendant colouration is essential to achieve proper balance. But despite a few rough edges, the Apex comes through strongly bouncing along enthusiastically with generous scale, ‘real’ dynamics, fine clarity and tension. Lots of information comes through from the recording, and this in turn makes listening a more rewarding experience, despite the occasionally strange effect the Apex has upon the cosmetics of the sound itself.

CONCLUSIONS
I’m tempted to break with tradition (or maybe just catch up with inflation) by sticking a Best Buy flag on this clever compact transmission line Royd, but I guess £485 is a good bit more than many are willing to spend on their loudspeakers. The Apex is far from perfect, to be sure, and still has more than its fair share of idiosyncrasies. But its simple superiority at bringing listener and music closer together is more than sufficient justification for enthusiastic Recommendation, especially for vinyl enthusiasts with decent quality ancillaries.

Excerpt from the final conclusion of the speaker round up, relating to the Royd Apex:

A price jump to £485 brings the floorstanders into the frame, specifically the Royd Apex, which is strongly Recommended and certainly one of my personal favourites. Retaining much of the eager character of the informative Eden, the Apex’ transmission line does a much needed fill-in job for the bass, giving a good overall balance with fine dynamics and pace at a very reasonable price, plus wiring flexibility that assists future system upgrades. Not the tidiest of sounds and not for headbangers, it is nonetheless amongst the most musically involving loudspeaker, at any price.