In this series of articles, I’ve been looking at methods to improve the stereo performance of your surround setup. Previously we considered some simple tweaks to the AV receiver’s configuration and the addition of a dedicated power amplifier. In this article, I’m going to investigate how to connect a stereo amplifier to an AV receiver. 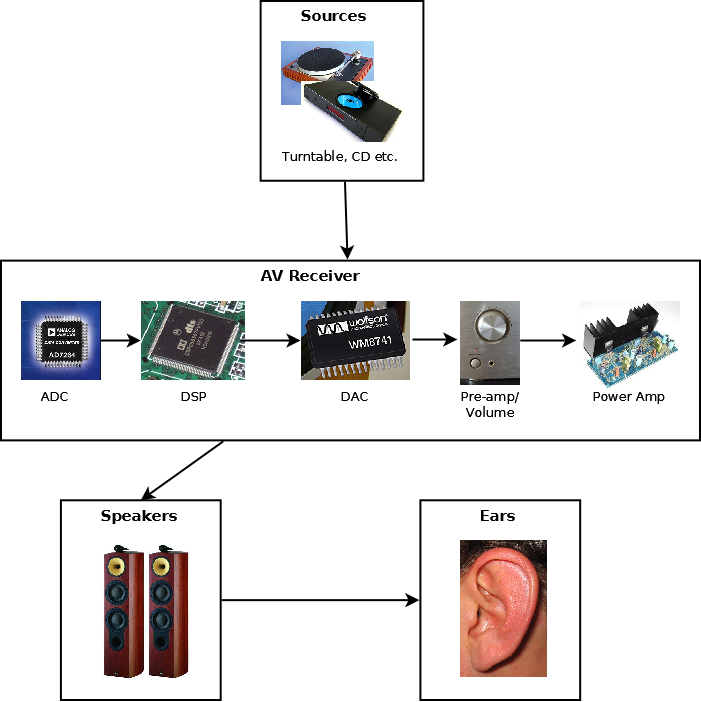 A dedicated stereo amplifier will give a cleaner sound, due to it containing fewer electronics that can cause interference. It will have its own power supply, again giving better performance. The laws of economics also help us: a £500 integrated amp will easily outclass the stereo performance of a £1000 AV receiver, as the cost is spread between fewer components and features. Finally, for stereo sound, the AV receiver will not be used at all and can be switched off, which can save electricity.

Many classic integrated amplifiers also featured good phono stages, for use with a turntable. Few AV receivers include this feature, and those that do, merely provide a basic implementation.

Speaker Switch
With a speaker switch it’s possible to flip which amplifier drives the front left/right speakers. The speakers and both amps are plugged into the switch box, which can then manually be switched either way. 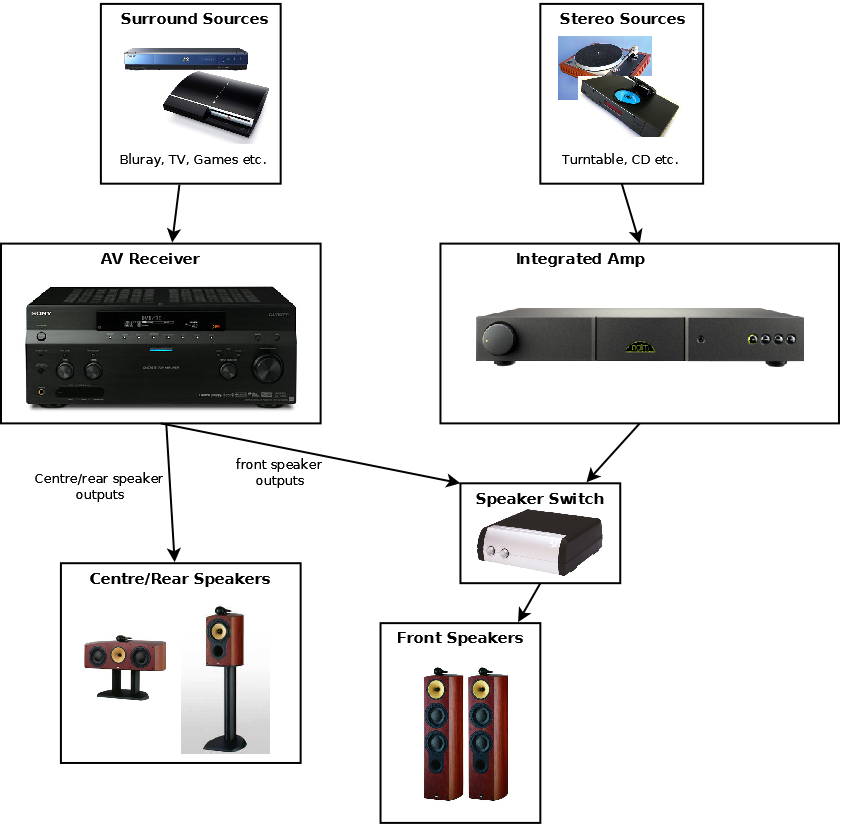 Care must be taken that the switch box at no point, mid-switching, forms a connection between the speaker terminals of both amps. Conversely some amplifiers without protection circuits can potentially be damaged when powered up with no load present on the speaker terminals. Thus, with this setup it is always best to turn off both amps prior to switching.

The big disadvantage of this approach, is you’re not taking advantage of the integrated amp when playing surround sound material. It simply isn’t used and the AV receiver drives the front left/right channels. 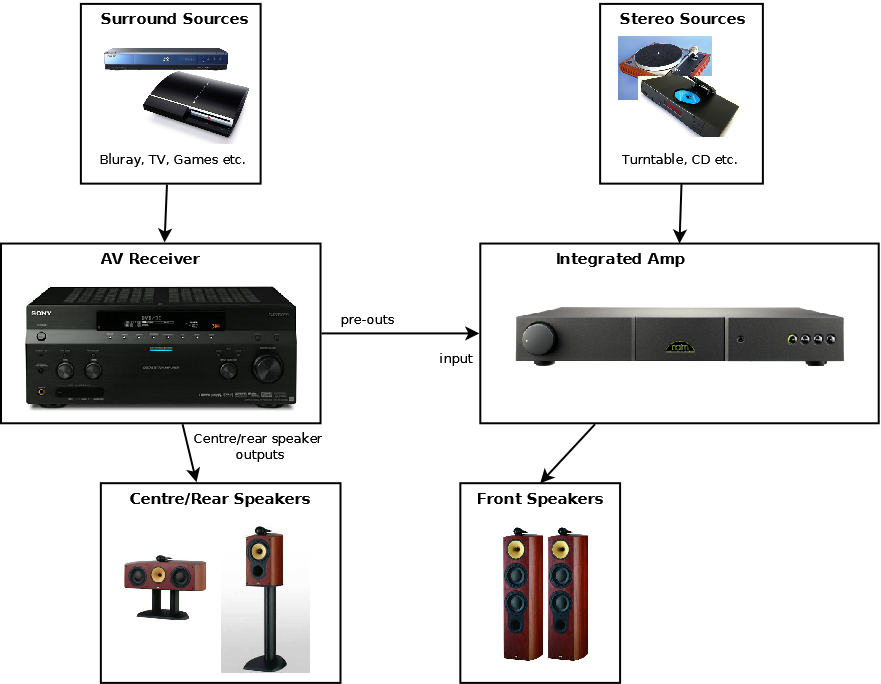 When using an analogue stereo source, you only need to turn on the integrated amp and select the appropriate input (only right-hand side of the diagram above is used). When listening to surround sources, you turn on both amps, on the integrated amp select the input connected to the AV receivers pre-outs and then adjust its volume accordingly. It’s getting this volume correct that is crucial.

How to Connect Stereo Amplifier to AV Receiver

This is achieved by connecting the AV receiver Front Pre-Outs to stereo integrated amp input.
Some stereo integrated amplifiers have a special input, called ‘unity gain’, ‘AV pass through’ or ‘home theatre (HT) direct’. This input will bypass the integrated amplifiers volume control, effectively using the amp as a power amp only. Just plug the AV receivers front left/right pre-outs to this special input. All other stereo inputs will continue to use the stereo amps volume as normal. This is a great feature, as it saves having to adjust the volume on the integrated amp whenever we wish to listen surround sources.

Note: some amps have this feature as a switchable option on one input. 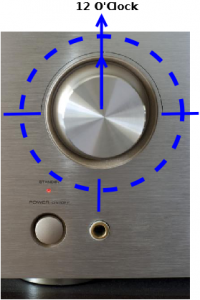 However, if your integrated amp doesn’t have this unity gain feature, all is not lost. Connect the AV receivers front left/right pre-outs to any input on the stereo integrated amp (avoiding any phono /turntable inputs!). Right now, you’ll find the volume too quiet on the front channels for surround material, so crank the integrated amp’s volume up to 12 O’Clock, then calibrate the speaker levels on the AV receiver. The integrated amp is now applying little volume attenuation, so is acting like a dedicated power amp. When playing stereo material, it’s important you turn down the volume, as it will likely be too loud and may damage your speakers and/or ears!

12 O’Clock is chosen, purely as a memorable point on the volume gauge that can be returned to easily when playing surround sound material. However, almost any point on the volume control will suffice. Some people apply stickers to mark the point. So long as you consistently return to the same volume, that the AV receiver was calibrated against, the levels will be correct.

Separate Pre-Amplifier
As mentioned above, a stereo integrated amplifier is essentially a stereo pre and power amp in one box. If desired, the setup described here could be implemented using a separate pre and power amp. If you’ve already followed the advice of the previous article, you may have a good stereo power amp and so will be halfway there. Exactly the same advice and setup is applicable to a separate pre-amp.

Conclusion
Adding a stereo integrated amplifier to your setup is a straight forward addition, that can yield some big improvements in stereo performance.  It is preferable to choose an amp that has the ‘unity gain’ feature to keep things simple and easier to use, especially if your setup is used by others members of the house who may not remember to adjust the volume accordingly or turn off amps prior to switching speakers. However looking only at amps with unity gain, may limit your choice too much.

Stereo Amplifiers with Unity Gain/AV Pass-Through/Home Theatre Direct Input
Below is a list of stereo amplifiers that have a unity gain feature. Well worth looking out for, as it saves the hassle of constantly changing the volume to 12 O’Clock when listing to surround sound sources. All the amps below can be switched into unity gain mode, to act like a power amp. Excluded from this list are amps the merely have an external loop at the rear connecting pre and power amp sections (e.g. Nad C326). Although these amps can act as a power amplifier, cables need unplugging and swapping to switch between normal stereo mode and power amp mode, making them impractical for this use.

This list is by no means exhaustive. Please get in touch if you know of other examples.