Reproduced from What Hi-Fi? December 1994.

Compact Merlins put a spell on us with a magical performance 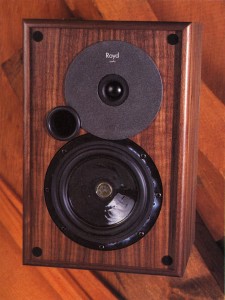 Royd Merlin
Loudspeakers: £298
For Open, natural sound; crisp bass
Against Best with rock; small-scale soundstaging, that’s it
Verdict ****
The Merlins produce the kind of per-formance with rock and dance music that you can only dream about. But the same life and energy doesn’t quite carry over to classical music
Royd 0952 290700

The Merlins are the latest model from Telford-based Royd, and plug the gap in the range between the Minstrels and Sorcerers. It must be said that, for L300, they conjure up a magnificent sound.
Outwardly they look a bit basic. But tagged onto some serious amplification like Arcam’s Delta 290 and a source like the Arcam Alpha 5 Plus, you’ll be spellbound by their crisp presentation. They have a deep, deep bass that motors through tracks like Prince’s Pop Life and their openness is quite staggering. Cymbals ring out clear and fast and Prince’s voice loses none of its natural expression.
These speakers really are magic. Feed them with the frantic dance mix of M People’s One Night in Heaven and they let fly. There’s no holding back the excitement and energy. Drive them really hard; they don’t complain one bit.
The Merlins give a reasonable classical performance, but their soundstaging could be deeper. But instruments are separated clearly and presented naturally.
The Merlins have terminals for biwiring and are ported to ensure they develop that powerful bass.
Such bass and openness from small speakers is mighty impressive, even if with classical they aren’t quite as good as with pop and rock. But it’s a minor point; they can keep you spellbound.