Royd’s A7, Coniston and Eden models share a seven-litre cabinet, which the company uses to “make full use of the advantages to be gained from small loud-speakers… fast and accurate bass performance, coupled with detailed and stable imaging”.
The A7 Series II is the least expensive in this range and like the others is designed to be used close to a rear wall, preferably mounted on rigid stands. It uses a 19mm soft-dome tweeter and five-inch paper-cone bass/ midrange driver housed in a distinctive gold-coloured surround. The speaker looks rather rough and ready, and its drab black ash exterior doesn’t convey the fine-tuning the design has undergone.
As an example of that tuning, below the terminals on the back is what looks like a conventional bass reflex-port. Close examination reveals this is 70mm aluminium cube, bonded to the back wall and the backplate of the bass driver. This is designed to tune the bass response, damp cabinet resonance, and increase power handling by acting as a heat sink for the bass driver.
There was no doubt that the A7 could soak up power manfully — indeed the sound came alive when it was driven with enthusiasm. Only the very low bass on Michael Jackson’s Smooth Criminal, played at very high levels, invoked any obvious distress.
Few speakers tolerate this sort of torture. The only problem with the A7 was that as it was driven harder its sound coarsened. You need avoid this, but still give the speaker plenty of amps and volts to excite it.
The acoustic bass on Mary Black’s Columbus had good character and definition, but was rather insubstantial, having little real impact. It happened further up the scale, too, Black’s voice being detailed and expressive, but robbed of some warmth.
On simple material, like Christine Collister’s singing accompanied by acoustic guitar, the A7 seemed most capable. Both elements were more convincing and richer than when other instruments were added. The Royd is best equipped to handle music’s fundamentals and basic aspects: nuances, often important ones, can be missed.
The Beethoven string quartets were a case in point. The A7 was clear and informative, but sounded a little uncouth. That’s the mark of the A7 — best with simple music, yet demanding a careful power balance between get-ting working and getting rough. 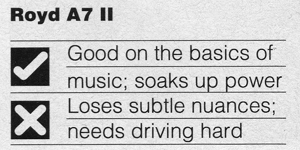