Recently one of the members of pinkfishmedia.net, rog, acquired a pair of Royd Seven loudspeakers, however their foam surrounds had deteriorated quite badly. Not surprising considering their age and all too common. Exercising his DIY skills, rog managed to replace the foam surrounds and restore the Seven’s back to their former glory. He reported on his progress in this thread over on pinkfishmedia.net. However, with his permission I have reproduced the key information here, where it can easily be found by others with Royd’s in need of refoaming.

Had a couple of new arrivals this morning a pair of Royd Sevens in need of some TLC.

As you can see from the photos below they need refoaming and I’m told one of the tweeters is blown too but hey they were a tenner and new foam and a tweeter will cost little more than £25 to £30. 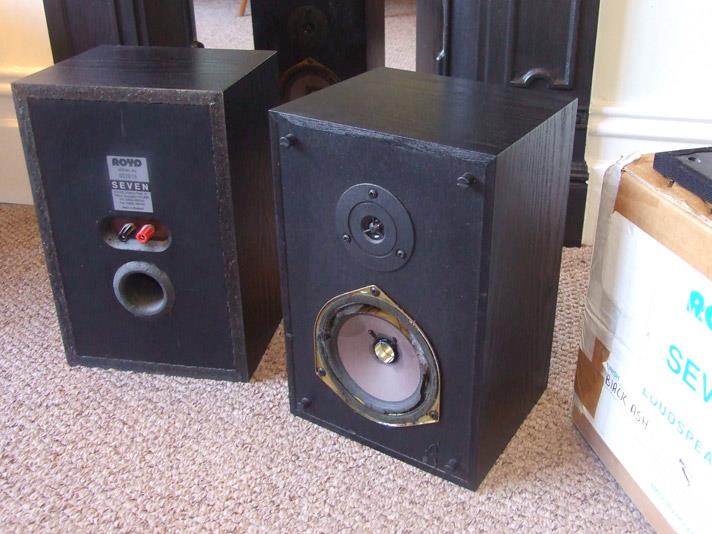 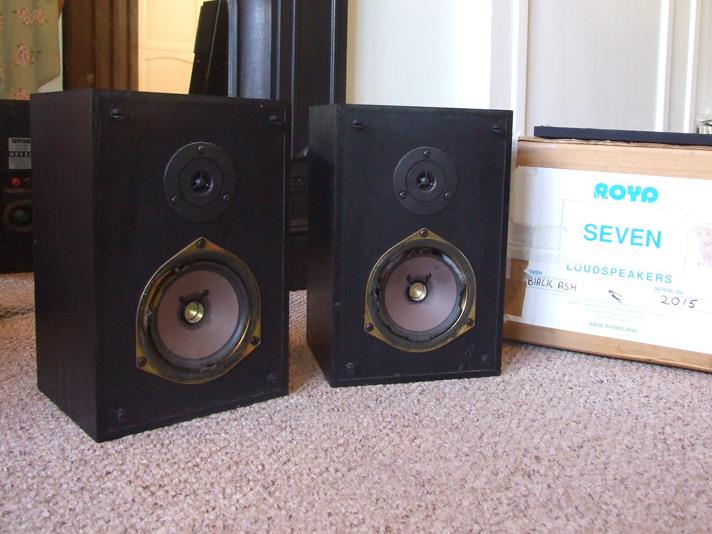 Here are some more photos, taken as I cleaned the rubber and glue ‘sludge’ off the drivers. A rather unpleasant, sticky and messy job but necessary before putting the new ones on.

There’s still ‘sludge’ on the actual paper of the cones so I’ll have to do a bit of research to see what the best and safest way to clean that off is.

It’s a nightmare to clean the old stuff off – took me the best part of the day. Secondly there’s very little clearance in the drivers between the diaphragm and the centre so get it wrong and you’re screwed. 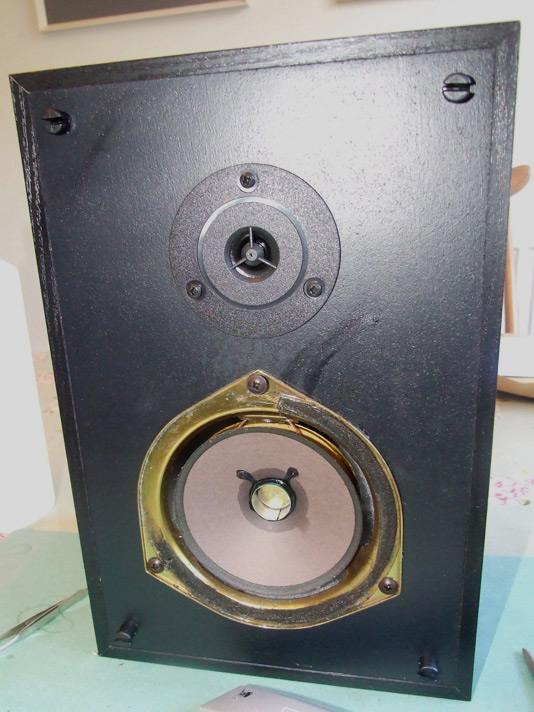 The refoaming kit arrived and things progressed from there – some tricky bits on the way and I’m still waiting for the glue on one speaker to dry but have listened quietly to the other and … oooh, don’t want to tempt fate before a proper test but I’m not unhappy as things stand lets put it that way. The second speaker has been a bit more trouble and getting the woofer aligned has been much more fiddly

Cleaning the last of the ‘gunk’ off the diaphragm: 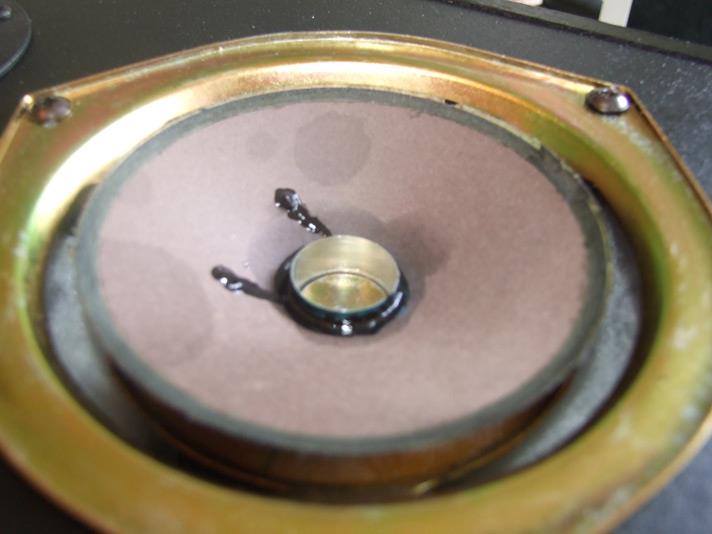 Both drivers clean and ready for the new foam: 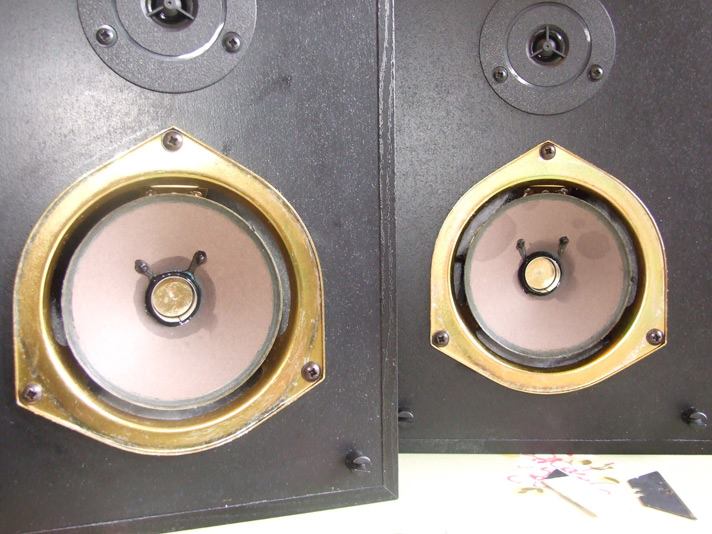 The new foam and glue, judging by photos of complete originals this doesn’t exactly match them either in colour or exact moulding despite it being marketed as a direct replacement. 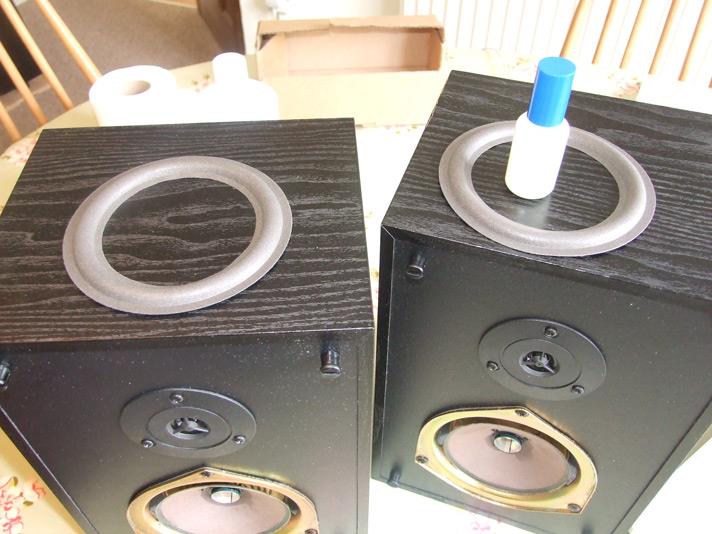 Checking they did actually fit and hey presto, yes they do! 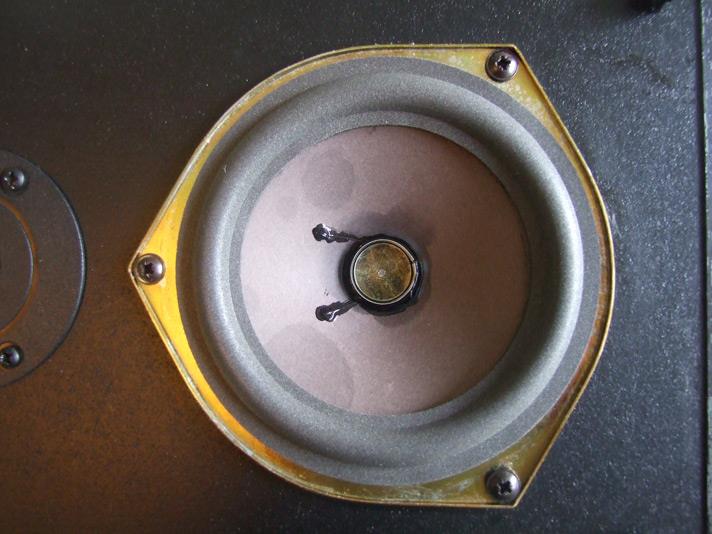 Glueing up the diaphragm side, note the glue goes onto the diaphagm as well as the new foam: 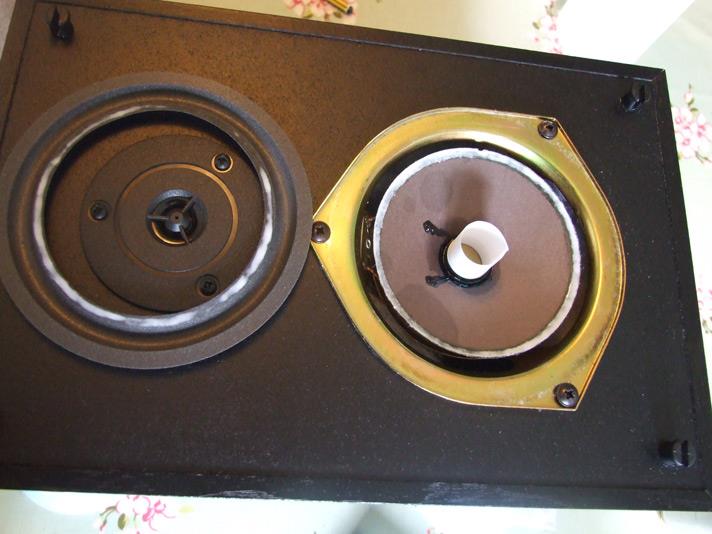 Matched up, stuck on and drying: 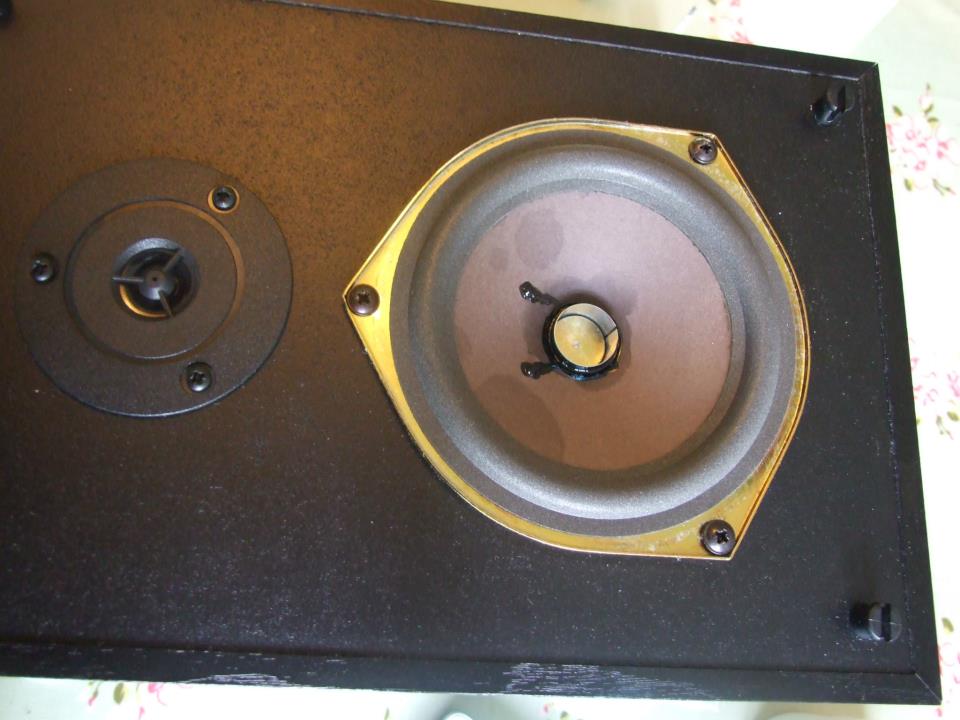 Lining the diaphragm up and checking there’s no rubbing or other issues, tricky this one but this was the easy speaker! Note that I actually kept the assembly in the cabinet and simply raised it enough to do the job. The alternative was to de-solder the terminals, take the assembly out and once done solder it back in. I didn’t fancy this and thank goodness I did it this way because the other speaker needed that connection to get it right, see below for more on that! 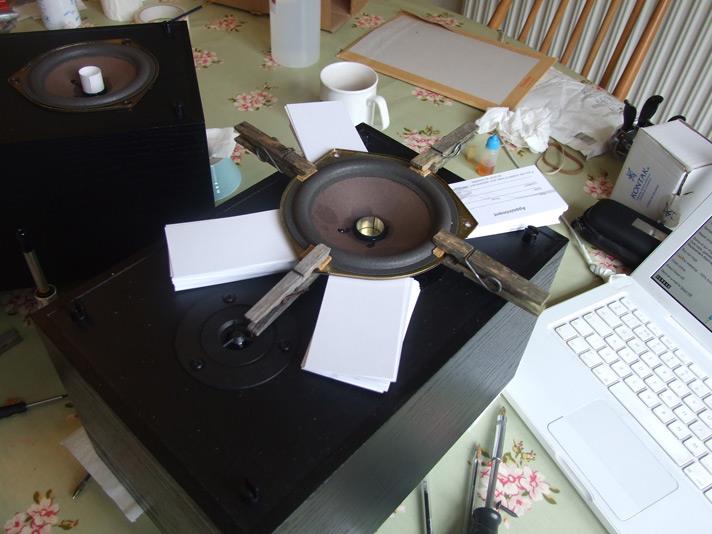 Close up as the glue dried, I applied glue between the pegs, left that to dry and then gently removed each peg and glued each area where a peg had been: 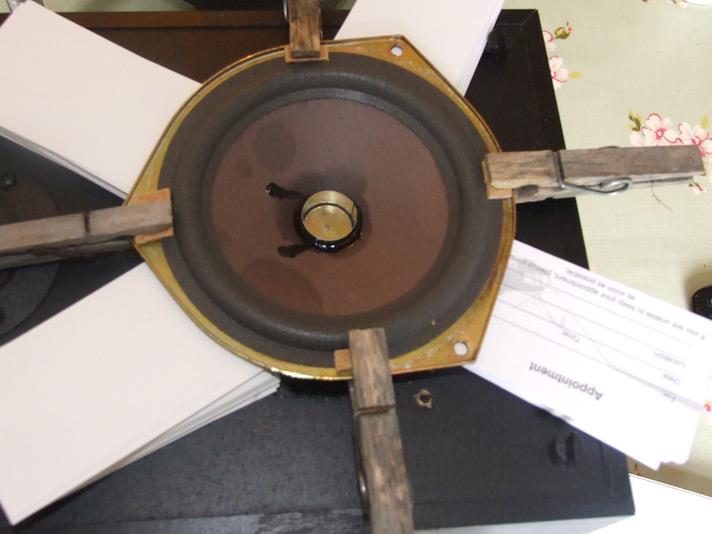 Okay. this is the second speaker raised up much higher than the first but same basic proceedure up to this point. However I discovered it was impossible to get the diaphragm aligned as I had with the other (by gently pushing down on each axis and adjusting the position of the foam until it was moving freely with no rubbing). Instead what I did was ‘jack’ the speaker up as shown, then attach speaker cable and (at a low sound level) adjust by sound and ear until I had removed all vibrations/rubbing. This was tricky and took quite a while by trial and error and I didn’t know if it had really worked until the following day when I felt brave enough to give the speakers a test run. (sorry the photo is a bit poor, the daylight had gone and I was in a hurry for obvious reasons!): 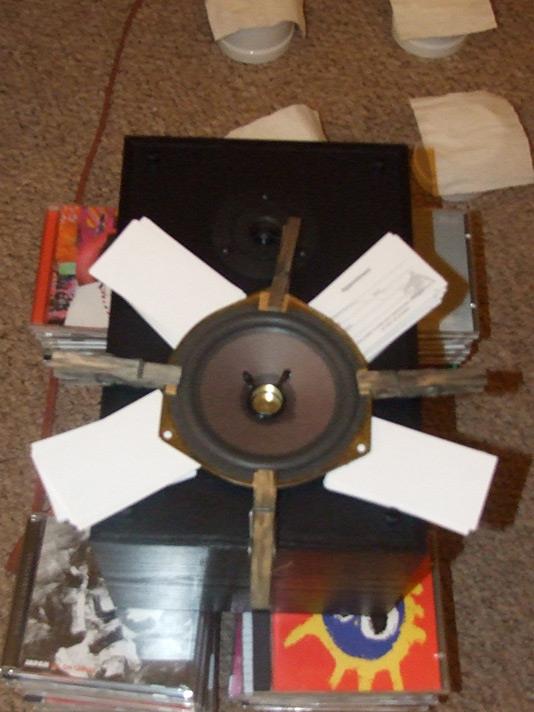 And here they are after all of that, I left them to dry overnight although I’m sure the glue was set pretty fast very quickly. Didn’t want to risk it though! 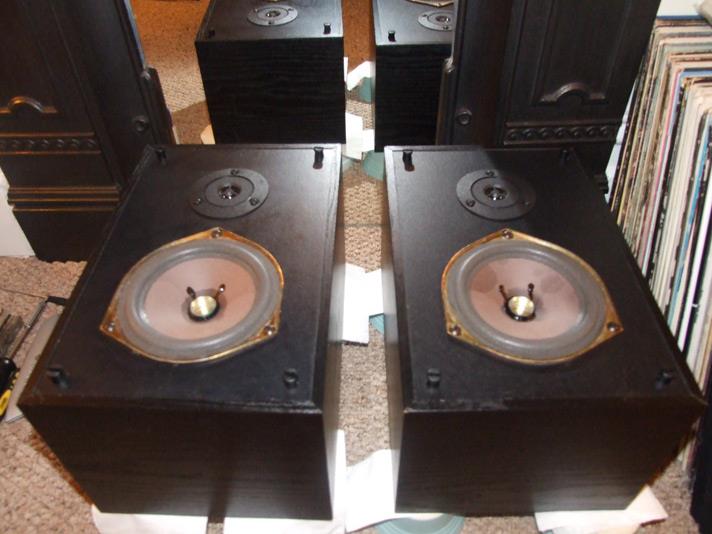 So as anyone reading this thread will have realised today I cranked up the little Sevens for the first time and actually listened to them properly, first off gently using my main system just to test them and then once I was satisfied all was well and the repairs had worked I moved them into the room I intend to keep them in and had a listen there too. 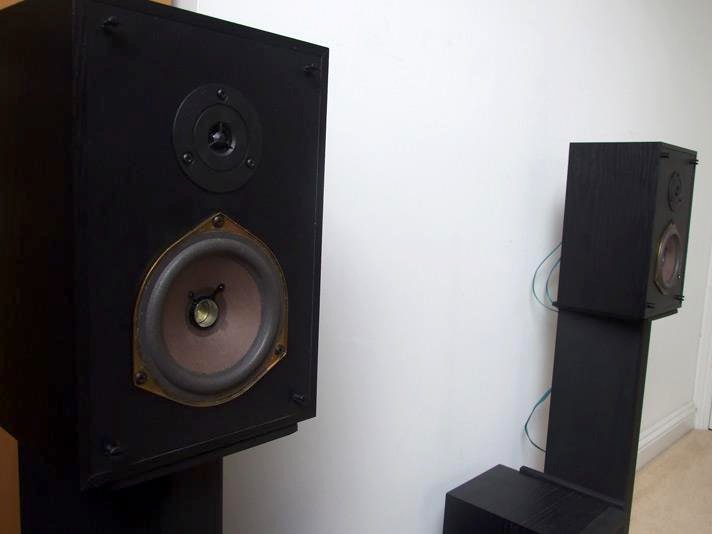 Many thanks to rog for letting me produce his guide and photos here. Do pop back to the thread on pinkfishmedia.net, to read read all the discussion and details of rog’s listening test and verdict of the finished product.