I don’t know whether or not the industry is becoming more fashion conscious but I, for one, thoroughly approve of the emergence of what I hope will become a trend for moderately proportioned loudspeakers which are designed to be floor-standing. They seem to be the ideal solution to a problem which faces many listeners. How to get a large-loudspeaker sound into a less than large living space.
For several years I lived with a pair of Linn Kans which were an excellent loudspeaker but which weren’t capable of producing high amplitudes at very low frequencies. Then I discovered the Naim SBL which would go low and loud, yet took up no more floor-space than the Kan on its stand had done. My problem was solved immediately without resort to importing a monster sized cabinet into a small room that was already bursting at the seams with hi-fi, records, and peripherals like a sofa and coffee table. What’s more the SBL looked better too gone now was the intrusive ironwork that was the Kan II stand – a necessary item but not one that could be described as attractive-looking – and its solid structure hid the cabling as well. This trend continued for Naim with the addition to the range of the IBL, a miniature version of the first speaker, built upon the same lines. And Linn have recently introduced their all-in-one contender, the Kaber
The only drawback, if it can be described as such, is the price of this aural and aesthetic satisfaction. the SBL costs £1242 and the IBL £690 (both in passive form), and Linn’s offering is only a few pounds short of the £1000 mark. All these speakers need respectable – for which read not inexpensive – amplification too. 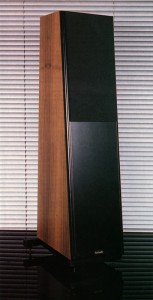