Reproduced from a review in “Audiophile” by Dave Wiley, published in May 1994.

Laid back in design terms they may be, but Dave Wiley discovers that these speakers deliver a bass sound nothing less than staggering – a compliment to the precise geometry of the cabinets.

Here we go again! After enjoying great speaker performance for last month’s issue, I’m going to tell you about yet another stunning model. This time it’s from Royd. Priced at between £229 and £298, depending on finish, the Minstrel pitches into a very competitive part of the marketplace. But it’s not quite like any other loudspeaker I’ve had in my system, either sonically or physically. For a start, it’s a tiny floorstander that can also be hung on the wall. And it has something I’ve never seen before – a side mounted port. The Minstrels are supplied as a mirror image pair, so you have the option of pointing the ports inwards or outwards – and experimenting can pay dividends.

On first acquaintance the Minstrel is hardly pretty. But, after living with it for a couple of weeks, I found its tiny size and interesting proportions almost made up for its lack of up-front grace. But with its particular set of musical strengths I confess I’m ready to forgive this appealing speaker almost anything…

Don’t run away with the idea that the Minstrel is part of the rough ‘n’ ready school. Its sheer ability to resolve low-level detail is up with the best – at almost any price. Cellos and pianos, the inflections of Bill Frisell’s electric guitar – all are presented bright and clear. The images are solid and believable, too, with a soundstage that extends in every direction. But to get the best imaging you need to experiment with positioning. The rules are thus: put the Minstrels just about anywhere within reason, and they’ll sound OK, but pull them out two to three feet into the room and they’ll start to sing. I found they sounded just a bit more at ease with the reflex ports pointing outwards.

Tonally, they’re slightly on the bright side. Tenor saxophones, for example, can sound just a little reedy, a bit edgy and bright; close-miked voices cut through the mix just a bit too aggressively. But these niggles are easy to forget. On the plus side is a bass performance no less than staggering from such a small box – and that’s not just with the speakers planted firmly against the wall. I found little loss at about two feet into the room, the position in which I experienced best performance. 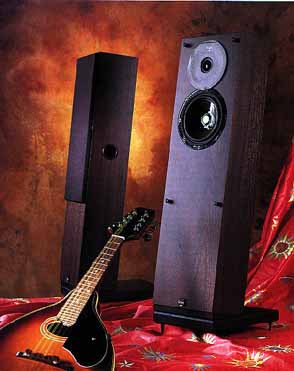 In terms of system matching, I’d go for a dynamic amp, such as an NVA, Naim or Pioneer A400, plus as open-sounding a front end as I could find. I’ve been punishing the Minstrels with my NVA TDSs for much of their time here. And the only indication that I’m listening to a pair of low-priced loudspeakers is their tendency to lose a just a touch of their openness with the wick turned up. I suspect the Minstrels may even partner a valve amp successfully, but I had none around to try. Weaknesses? Well, they don’t have the sheer ear-punishing ability of, say, the considerably more expensive Impulse HG. But then the Minstrels have been designed with a different set of priorities in mind. The long-throw bass/mid cone pours out dynamics, but it can easily hit the end stops with a powerful amp. Played at normal levels, you just have to marvel at the Minstrels’ ability to let you know you’re listening to a top-flight system.

In the past I’ve occasionally marvelled at other lower-priced loudspeakers that have made a reasonable job of handling the TDSs. The Minstrels are head-and-shoulders above those others: they almost make a system containing a £6000+ pre/power and £250 loudspeakers a viable choice rather than an oddity!

You mustn’t think the Minstrel so specialised a product that it will only work with very expensive gear in a superficially unbalanced system! It’s just that I’ve had so much success with the TDSs, and the Minstrels show up the dynamic and musical detail limitations of some notable budget and mid-priced amplifiers. If only these speakers went louder…

Overall, the Royds are a revelation and a delight that I’m loathe to criticise. They’re a unique experience. They’re, a breath – no, a big gulp! – of fresh air. They’re hugely enjoyable – speakers with which to marvel at music. They’re such good value you could even end up reappraising the balance of your hi-fi budget.

MATHEMATICAL MODELS BEHIND ROYD SPEAKERS
Royd takes a unique approach to loudspeaker design. The company’s Joe Akroyd is an engineer by training and has developed his own mathematical models which he applies to the speaker range. The Minstrel is the product of his current thinking and mathematical models – one set of equations for the drive units, and a combined set for the enclosure.

In implementing his theories, Akroyd has insisted Royd must be one of the few loudspeaker makers that manufactures its own drive units. What’s more, Royd produces a whole range of drivers for its products – and the Minstrel’s are unique. The tweeter is from Vifa, but is reassembled and converted from a single to a dual-chamber design, to cut down on reflections from the pole piece and to lower the resonant frequency.

The 5 inch bass/mid unit consists of a Royd designed chassis, manufactured for the company by a diecaster. The cone, spider and surround are also bought in. Royd winds its own coils and assembles the drive units in-house. The cone is treated with two materials, one of which, Akroyd says, exhibits the highest absorption he has found.
It’s possible to see there are two damping materials if you look closely at the cone. But the most immediate impression is that the surface is lumpy! This is no manufacturing inaccuracy – it’s intended. Akroyd explains that the cones are designed that way to avoid perfect symmetry – such a damped asymmetric cone suffers few, if any, major cone resonances. Both units have been designed with one overriding ambition, to extract the most transient performance. The trade-off is that maximum sound pressure levels are somewhat limited – it’s quite easy to get the unit to hit the end stops with a powerful amp.

The Minstrel’s enclosure matches the theoretically correct volume for the bass unit. Akroyd says: ‘…the geometry comes out beautifully’. With his equations and the perceived need for a small floorstander, the Minstrel almost designed itself! The reflex tube fell exactly at a combination antinode, with almost no unwanted sound output from the port. Its theoretical positioning was almost ideal, the end of the tube close to the back of the bass cone itself, leading to a close coupling between cone and port. Side porting allows the Minstrel to be wall hung, but when freestanding, the ports may be directed outwards or inwards – an aid to fine tuning.