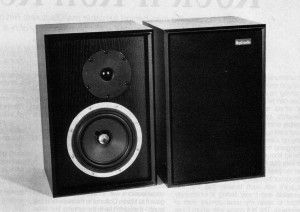 The gestation of the £235 Royd Eden loudspeakers began with the apparently sample notion of substituting a cast aluminium chassis for the existing pressed steel device found in the bass/ midrange units of the smaller Royd speakers. The increased strength of the casting would allow it to be made with a reduced surface area while achieving greater rigidity and better tolerances. An additional benefit would also arise from the increased window seen by the cone as it fared back into the enclosure. This reduction in internal resistance and reflection – caused by the chassis – means that the cone’s movement will now be determined to a greater extent by the design parameters of both port and cabinet. It should also allow more of the rear firing signal to be absorbed by the internal wadding rather than being reflected back out through the cone.
So much for theory – but life has a habit of throwing a little sand in the best laid plans and it was now discovered that, because of the chassis’ increased rigidity, the new unit was feeding too much energy into the cabinet and other changes would have to be introduced.
The first of these was to increase the number of mounting screws to eight and then the cabinet underwent extensive damping. As the most troublesome resonances created in a reasonably rigid cabinet occur at high frequencies the addition of mass to the cabinet walls leads to a reduction in the level of cabinet ‘noise’. The damping is achieved by the addition of four 1/4″ steel plates which are stuck to the panels on the inside of the cabinet.
Another change is the omission of any dust cap. This can be seen with the aid of strong light through the Royd’s fixed grille cloth. Listening tests,with and without the cap, lead to a distinct preference for the results produced in its absence.
The Edens continue Royd’s use of a vented aluminium tube which attaches between the ferrite ring lip of the bass/midrange magnet assembly and the rear cabinet panel. Pressure from the inside of the cabinet passes through the vent slot to exit via a rear port. The tube also acts as a brace – effectively sandwiching the drive unit chassis between the front and rear panels. It further aids heat dissipation from the unit.
The Vifa soft dome tweeter also came under scrutiny: while excellent in less demanding circumstances it needed improving for use in the Edens. It was decided to modify the unit to a dual cavity design. This involved stripping down the assembly, demagnetising the magnet and then drilling a hole down the centre of the pole piece. When remagnetised the flux was undiminished but there was now an open cavity behind the dome which both reduced reflected colourations and, by venting into an additional and larger fibre filled cavity, pulled the resonant frequency of the tweeter down to 500 Hz. Ferrofluid damping was added to aid heat transfer away from the voice coil and a small pin prick was made in the dome – to allow for equalisation of pressures within the unit.
Completing the picture are the excellently finished speaker cabinets whose size belies their considerable weight.
I decided to listen to the Edens on the end of a system that I know well – Linn LP12, Ittok, K9, Naim 32, Hi-cap and 140 power amplifier. The speakers rested on Kan II stands and were connected to the amplifier by Naim cable.
At no time since I received them have the Edens shown any ability to disappoint. The speaker reproduces the finest of detail with consummate ease and seems totally unprocurable In the presence of a clean input. Voices on record and off air, have a believability and presence that make radio drama entrancing and provide new emotional clues to a singer’s intentions. This finely etched presentation extends to the bass where all aspects of each note’s shape are followed with precision.
Such clarity might be thought to be a double edged sword, necessitating the use of only the finest sources. I found that the Edens were wonderfully at home with the Exposure X and Nait 2 providing with an LP12, Ittok and K9 a system of remarkable capabilities. It is a rare event to have a pair of speakers for audition that demand my attention as much as these have. In the first weeks I found myself constantly drawn away from other pursuits to re-examine my record collection. More surprisingly, I found that even recordings made some years ago on a Sony Pro Walkman had the ability to fox me when first played. As their intros emerged, the new level of clarity made explicit elements in the mix that had previously been absorbed only in outline. Apparently simple dub treatments revealed such a wealth of invention that my respect for certain producers increased tenfold.
Having lived with these speakers for six weeks I can confidently say that the original pleasure of discovery has not faded and their ability to handle the more fundamental aspects of music reproduction is of an equally high order. In my never ending quest for fine hi-fi that is actually affordable I have come across a number of worthwhile products. The Edens have confirmed my belief that you shouldn’t have to mortgage your house to listen to records with insight and enjoyment – a David among Goliaths.