Extract from a round up of small speakers in Hi-Fi News, November 1989 (Vol. 34, No 11), spanning the price range of £250-£400. For sake of conciseness, I have just reproduced the review of the Royd Eden and the final overall conclusion. 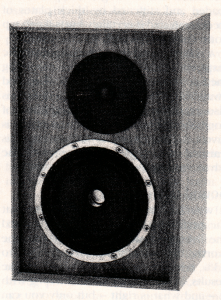 At first sight this miniature looks too expensive. However, scepticism is somewhat dispelled when you pick up a packed pair and stagger under their combined weight! What can be in the enclosures, iron bars? Sure enough, the panels are loaded and stiffened by thick plates of steel scrap, and it certainly hurts if you rap your knuckles on this inert carcase.

A reflex-loaded two-way design, specific instructions are provided for mounting the Eden with its back to the wall, spaced away from it by 1 3/4in. An active version is also available, for use with amplifiers of your choice, and a 60W power rating is given. A traditionally styled model, it is finished in a vinyl print wrap, with the advice to use good spiked stands.

It would be no exaggeration to say that the performance of this speaker divided the listening panel. For what it may be worth, the marks ranged from 33% to 53%, with an average of 43%. From the results, I can describe what is wrong with it – and what is right – but only you can decide whether or not to buy it!

Taking the good points first, this speaker had no boom in the bass, and showed a very fast, lively and detailed sound, vaguely resembling the Wilson Watt. High clarity and exceptional, if exaggerated, pace in the percussion areas was also demonstrated, and in this respect it had foot-tapping Rock potential. On the minus side, it didn’t appear to have any bass. The tonal quality was severely tipped-up, with a ‘tin can’ nasality on drums and a bright ‘breathy’ treble. No attempt was made to reveal perspectives on classical programme. At times it could sound positively caustic, while on other occasions it got away with murder!

‘Fast’, with excessively lifelike (or exaggerated) transients – the panel’s reactions were not all that helpful in producing an overall assessment. Stereo images were well focused and the sound was certainly very dynamic, but reproduction of depth and ambience was marginal.

This 7 litre miniature is weakly reflex- tuned by a rear-mounted duct narrowed by a pierced disc placed at the exit, with a ‘Q’ so low as to barely disturb the impedance curve (Fig 5c). With a 105mm active diameter, the pulp-cone bass-mid unit is built on a 145mm cast-alloy frame, fixed to the cabinet by eight screws and a cured-silicone rubber seal. The driver magnet is weakly glued to an internal reinforcement. High frequencies are produced by a 19mm soft-polymide VIFA dome unit, with a rear chamber. The speaker is not bi-wire_ and the crossover is of standard commercial quality, 2nd- order for the bass and 3rd-order for the treble, hard-wired. The cabinet treatment certainly results in a non-resonant enclosure, while the interior air space has been damped using polyester fibre.

Claimed at 90dB, our estimate for the sensitivity was 88dB/W, while some explanation for the ‘fast’ sound can be seen in the overdamped bass and strongly rising response about 200Hz (Fig 5a). This gives a 5dB lift, whereas in theory only 2-3dB is required for wall-mounting. A presence-range dip is followed by a peaky, elevated treble, and even with 3rd-octave smoothing at a 2m measuring distance (Fig 5b) the response does not fit the usual limits. But the driver output integration isn’t bad. Anechoically, the LF -6dB point is at a high 150Hz, with a room response providing some output down to 50Hz only if the system is driven really hard to bring it up to audibility! In-room, the axial response ‘characteristic’ remains in evidence (Fig 5f), the result being singularly irregular in terms of tonal balance, with a seriously depressed bass band. Channel-matching was good, with the impedance characteristic representing an easy amplifier load; but the speaker did not fare too well in respect of distortion at the higher 96dB test level (Fig 5a), where 2nd-harmonic is poorer than average and 3rd peaking to 2.6% at 160Hz. But results were considered satisfactory at 86dB (Fig 5d).

Testing this speaker was an interesting experience. It was worthwhile in the sense that good correlation was achieved between its unusual and unbalanced frequency response and the unsighted listener comments. The effect of the thin, forward mid-range was also noted in terms of subjective ‘speed’ and pace, an aspect where this design excelled. The lack of bass also helped in this respect. Conversely, the natural tonal balance and perspective of an orchestra was quite beyond the Eden, and in my view it would only really be suitable for rock material; even then, it would be very much of an acquired taste.

The lab performance was weak, with the wall-mounted response needing more equalization plus a flattening of the mid- treble output. In addition, the distortion was rated poorer than average for the price category. Worth hearing if you like this sort of thing, but the Eden was too off-beat for serious consideration.

In some ways the most exciting speaker of the group was the highly idiosyncratic Royd Eden. It would be easy to dismiss this simply on the basis of its frequency response, which reflects a quite primitive design – a lack of tonal balance and a disappointing level of driver output integration. Conversely, it felt as if it was built like a steel brick, and this, plus other aspects of its engineering, have resulted in a sound which defies its tonal and associated coloration errors and achieves a high standard of pace, involvement and both dynamic power and ‘speed’. Unsuited to classical programme, what it achieves on rock material is important. The wall-mount Allison CD-s fooled many panellists into believing that this was a much larger and more costly design. It did most things well, and I particularly like it for its ability to deliver pace and extension in the bass, while at the same time preserving an essentially neutral tonal balance on the wall. It suited both rock and classical programme well, and is my recommendation in this price sector for this particular application. Linn’s Helix was a disappointment in that it aspired to neutrality, but in our panel’s view reached only an ordinary standard. Traditional Linn virtues of bass speed, rhythmic line and lively transients were damped down in this bland but essentially pleasant speaker, whose inoffensiveness will cause a salesman no problems at the demonstration level. The Harbeth Compact has recently won ‘Component of the Year’ award in Japan, and with its craftsman-like build quality, real-veneer finish and all-round studio monitor standard of competence, it is easy to understand why. The ‘ex-BBC’ pedigree of this company is also appreciated overseas. Well worth hearing, we nevertheless felt that a bit more drive and pace would not have done this design any harm. Heybrook is now into metal-dome tweeters, with a vengeance, and the HB 100 sought to exploit the maximum clarity possible from the available technology. This was verified by the listening tests, where the speaker showed some strong points. But perceived focus was not too good in the upper frequency range, nor were the results consistently good over the spectrum of tests, so only a guarded recommendation is given here. Last but by no means least, we have the evergreen Spendor Prelude in Mk II form. with its classically neutral tonal balance and lively bass (which may need a bit of damping from an SP2 II foam port-liner in some rooms), the informative Spendor hallmark was clearly present, and a continuing recommendation is thus achieved for this model under its 2/2 labelling.