Reproduced from a Hi-Fi Choice published in January 1989 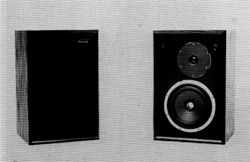 Royd loudspeakers, named after proprietor Joe Akroyd, is one of those classic little British companies which does its own thing, beholden to no-one and driven by one man’s personal vision of what hi-fi ought to be about.
We’re reviewed various models in Choice over the years, most of which have performed respectably well, albeit without breaking any new records. But the £230 Eden is a curious loudspeaker, in some senses the most curious in this 30-strong group. It’s a miniature, yet it’s also as heavy as models twice the size. The drive units are a little unconventional too.
Having got over the shock of trying to pick up a pair of these tiny speakers at the same time, it turns out that the cabinet walls of the rear reflex-loaded enclosures are mass damped with heavy pieces of steel – magnet poles pieces no less, presumably surplus to requirements or available and suitable at low cost. You also get real wood veneer on four faces over 15mm stock, and steel brace between baffle and rear.
The Royd-built bass/mid driver is pretty unconventional too. To start with it has a 19mm voice coil, which is almost unheard of for bass/mid drivers but theoretically should increase the high frequency bandwidth and overall stiffness of the unit; it also has a very light, undamped paper cone, a profiled, skeletal basket behind the cone, and lots of fixing screws. The tweeter is a Royd-modified 19mm soft plastic dome from Vifa.
The grille is best left on for aesthetic reasons, and has a well chamfered frame. The standard model (as supplied) has a single pair of terminals, while an active version is available for the same price. Also available for £48 is a pair of external crossovers for using the ‘active’ in passive or bi-amp mode.

LAB REPORT
Given the variations in the 1m reference response it is difficult to specify sensitivity precisely, but assuming some wall assistance, a below average 85dB/W represents a practical assessment. Pair matching might have been closer at high frequencies. Distortion is reasonable enough given the box size, but taking the limited bass output into account our 96dB test level must be close to a working maximum.
The frequency responses show that bass is significantly curtailed, even with the assistance of the recommended back-to-wall siting, and the region 1.5kHs-5kHz is also slightly depressed on-axis, though less so off the main axis. The room averaged response confirms the slightly forward midrange and reduced bass, but is reasonably smooth over-all nonetheless.

SOUND QUALITY
To say the Eden rated a little below average overall would be true enough, but a woeful oversimplification. In two separate presentations the Eden split the panel completely, generating similar degrees of like and dislike with little equivocation.
On the negative side, the Eden has little bass worth speaking of, a somewhat ‘boxy’ midband, and a somewhat untidy and uneven treble. But on the positive side, it is one of the fastest, most coherent and informative loudspeakers on the market – right up there with Isobariks, Darii and son on. It also worked particularly well when significantly over angled inwards, which tended to ameliorate the treble ‘sting’ somewhat.

CONCLUSION
This is a loudspeaker for the committed. It won’t suit the majority of systems or tastes, but it is already threatening to become a minority cult, and well deserves that status. I admit some personal prejudice in acknowledging it’s my sort of speaker, simply because it makes my hi-fi system sound more interesting and enjoyable than nearly all alternatives. I therefore feel Recommendation is fair, while acknowledging that the panel’s collective opinions makes Best Buy status inappropriate. But those who can live with its vices – which are real enough – may well find themselves unable to live without its virtues.