Reproduced from a Supertest of Floorstanding Loudspeakers in “What Hi-Fi?” published in April 1993.

For Cogent and informative with all types of music; easy to set up.
Against What a daft name!
Verdict *****
Undemanding speakers that can make listening to music an almost religious experience. The Abbots get right inside a performance and shine a light on the subtleties that many speakers miss. Their sound is so captivating they’re guaranteed to keep you on the edge of your pew.
Royd 01952 290700 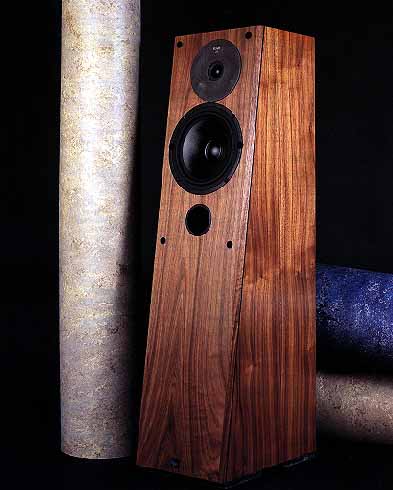 Dearly beloved, we’re gathered here today to witness the joining together of snappy dynamics and controlled power, a union that promises a lusty performance with all types of music.

A great deal of thought has clearly gone into the design of Royd’s Abbots. The reflex-ported two-ways use a heavy steel and polyurethane elastomer base plate to damp unwanted vibrations in the cabinet structure. The cabinets are also “handed” with a dedicated left and right speaker in each pair, and their sloping baffle arrangement acts to provide time alignment of the drive units.

The Abbots are an accommodating design and this manifests itself in both their unfussiness about placement in the listening room and the ease with which they can be driven. If you want to hear them at their best, Royd recommends amplifiers from the Naim, Exposure and Linn marques as particularly suitable.

The Royds exhibit unseemly zeal (for speakers of a clerical persuasion, that is) with rock music’s timing and dynamics: they latch onto rhythmic information with toe tapping alacrity and responsiveness. Hurl some of Frank Zappa’s intricate big band interplay at them and they simply lap it up, pulling out its subtlety and inflexions with striking clarity. Bass, mid and treble information gels to give a really coherent and accurate picture of even highly convoluted playing. With simpler stuff the story’s the same, the Abbots driving rhythms along with conviction and power.

They also gave a captivating account of classical and acoustic-based music. The Abbots revel in portraying instrumental timbre and character. Their solid, even tonal balance isn’t perturbed by the normal stumbling blocks like period strings or blaring brass. In all, they give a more than creditable showing, even with severely demanding musical pieces.