What do Phono stages do and why do I need one? 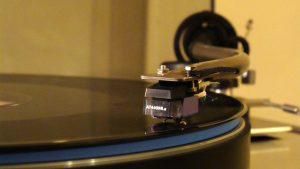 A phono stage amplifier is essential for anyone wanting to use a turntable. The reason for this is two fold:-

If you were to plug a turntable into a standard line input on amplifier, you would hear a very quiet and tinny sound with no bass.

Some integrated amplifiers contain an inbuilt phono stage on a designated input. Other amplifiers can be upgraded to add a phono stage internally. In either case the quality of these build in phono stages can vary drastically, so you may want to use a separate phono stage as an upgrade.

Including phono stages inside integrated amplifiers and AV receivers has fallen out of fashion recently. Less customers need this feature, costs can be cut and it frees up an input for other sources (game console, TV, iPhone etc). In this situation you will need a separate phono stage pre-amplifier to sit between your turntable and main amplifier.

MM or MC, What Flavour Should I Get?

Cartridges on turntables come in two flavours: Moving Magnet (MM) and Moving Coil (MC). The critical difference is MC cartridges output a much lower strength signal, so require much more amplification to bring it up to line level. This ultra low level signal requires very high quality components to maintain clarity. MC phono stages often have the option to tweak ‘loading’ to fine tune impedance matching too. Both of which increase the MC phono stage costs significantly.

Another alternative is to use a step-up transformer, to sit between your low output MC cartridge and an MM phono stage. The transformer performs a little amplification, then the MM phono amplifies a bit more again.

Some phono stages are MM or MC only, where as some are switch-able between MM and MC.

What Phono Stage Should I Buy?

Now you’ve had some background, the question is what are the recommended phono stages around the £100 mark. At this price point you are mostly limited to MM phono stages. Those that do support MC are generally basic and often have no option to tweak cartridge loading.

These recommended phono stages are a mixture of current new models and older models that you maybe able to find second hand within budget. The latter may give you better bang for your buck, since they probably retailed for a lot more than £100 when new.

So, in alphabetical order…